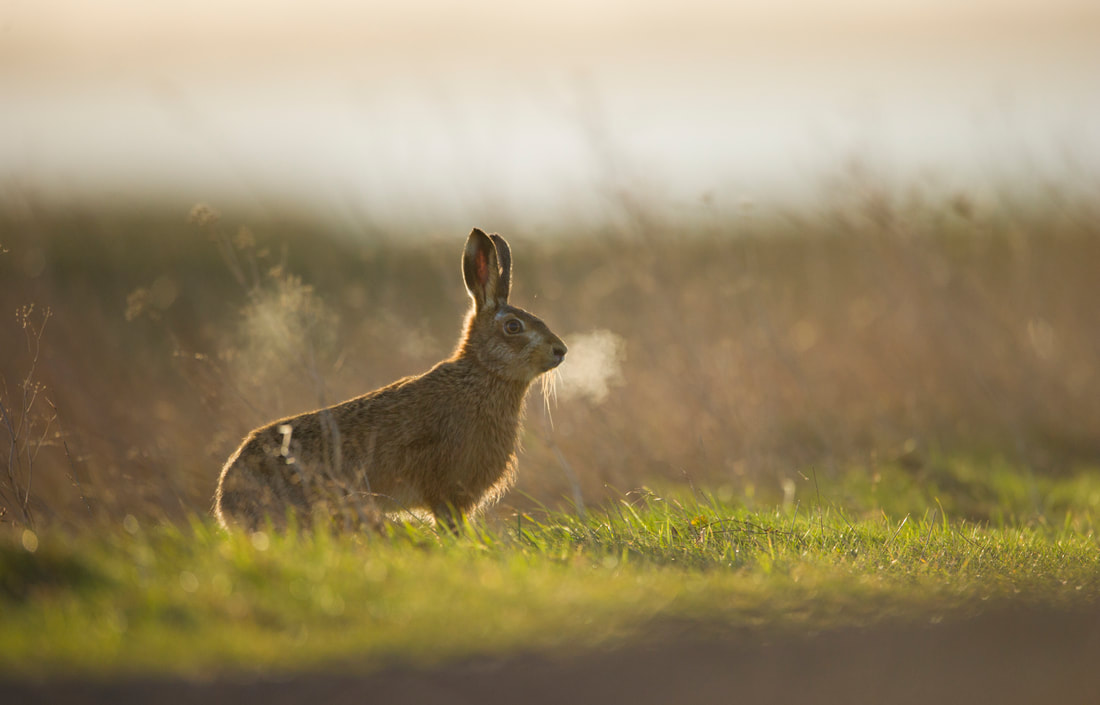 Brown hare will be affected by HS2 plans. Image by Andrew Parkinson
Today (Friday 21st December 2018) the public consultation into likely environmental impacts of the building and operating of Phase 2b of HS2 closes – it covers Crewe to Manchester and the West Midlands to Leeds.

HS2 Ltd’s own figures for the latest phase of the Phase 2b route show it will have a devastating impact on important places for wild plants and animals. 12 highly protected areas for nature conservation known as Sites of Special Scientific Interest, 111 Local Wildlife Sites and 19 ancient woodlands will be seriously damaged.

Katherine Hawkins, Senior Living Landscapes Officer at The Wildlife Trusts says: “HS2 Ltd’s work on this latest phase of the HS2 route is derisory in its assessment of the environmental impact. It is incomplete, there isn’t enough detail, there are significant omissions, it lacks sufficient proposals to compensate for nature’s loss, and to make matters even worse, there’s very little information about the impact on species. On the evidence, we have been given, this phase will result in an unacceptable level of damage to wildlife along the route.”

Wild and precious landscapes including ancient woods and rare peat bogs are under threat from the latest phase of the high-speed rail link – wildlife such as barn owls, otters, skylarks and endangered water voles will lose their homes as 176 miles of track is constructed.
Today The Wildlife Trusts challenge HS2 Ltd to create and restore more wild places than are being destroyed and damaged by the construction of the route, and to save irreplaceable habitats like wetlands, and ancient woodlands from destruction.

Katherine Hawkins continues: “Due to the inadequate environmental statement, it’s hard to understand how HS2 Ltd will compensate for the damage that it will cause. Furthermore, it is unacceptable that HS2 Ltd has only committed to ‘no net loss’ for biodiversity.  At this rate, there will be a huge loss of wild habitats and species along the entire route of this £56 billion project at a time when HS2 Ltd should be committing to creating a ‘net gain’ for nature.  Wildlife is in serious trouble – more than half of the UK's species are in decline. The principle of net gain is recommended by Government planning policy guidance – this means that nature should be left in a better state following a development – and not in a worse condition, otherwise nature’s decline will never be reversed.

“We’re urging HS2 to avoid destroying irreplaceable habitats – and we’re calling on them to take more action to help wildlife recover by creating and restoring wild places on a landscape scale. HS2 could do this by establishing a wide ribbon of wild countryside on either side of the line, with new natural places for people to enjoy and for wildlife to thrive in, alongside farming and other land uses. We want to see landscape-scale plans for nature’s recovery, and we’ve shown in our Greener Vision report how this could be achieved for much less than 1% of HS2’s original budget. By taking a more strategic approach to restoring the natural environment, HS2 Ltd could make a real contribution towards securing nature’s recovery.”

You can see the examples of wild places under threat and concerns raised by individual Wildlife Trusts along the route of HS2 Phase 2b further below. The Wildlife Trusts’ Greener Vision for HS2 is here.

Cheshire Wildlife Trust – more here HS2
Holcroft Moss. Designated as a SSSI, the highest level of UK protection for nature conservation, Holcroft Moss is a favoured breeding site of the beautiful yellowhammer; a Red List bird which is in decline; it’s home to a small population of common lizard, and plants like cranberry, cottongrass and six species of sphagnum moss.  Cheshire Wildlife Trust are restoring the bog’s ability to hold water. The route will run very close to this rare lowland bog, plans for an embankment to carry the track will create a barrier for wildlife, severing the nature reserve from surrounding important peatland SSSIs/Local Wildlife Sites. These wild places support wintering birds, breeding birds, such as the yellow wagtail and skylark, common lizard, brown hare, water voles and 14 species of dragonfly.  Cheshire Wildlife Trust wants to see a viaduct to stop this fragmentation and allow wildlife to move freely between habitats.
15 Local Wildlife Sites: Cheshire Wildlife Trust is also concerned about at least 15 Local Wildlife Sites and 13 areas identified as potential LWS, which could be affected by the route. What will become of the kingfishers flitting along the River Bollin, tawny owls calling in the woods near Northwich, hare in fields around Whatcroft and grass snakes which live in rushes north of Crewe?

The Wildlife Trust for Lancashire, Manchester and North Merseyside – more here HS2
HS2 impact in Greater Manchester
Great Manchester Wetlands Living Landscape. HS2 Ltd’s draft Environmental Statement ignores a vitally important landscape-scale nature conservation area. The proposed route through Wigan Borough severs the east from the west of the Great ManchesterWetlands Living Landscape; an essential network of wildlife corridors and stepping stones allowing wetland habitats to thrive and survive.
This locally designated Nature Improvement Area is already split north from south by the M62 and the Liverpool to Manchester railway, HS2 will fragment it even further.  HS2 will create a barrier isolating populations of willow tits, the UK’s most threatened resident bird. They are very vulnerable to loss and fragmentation of habitat, and numbers have declined by 94% since the 1970s. Large Heath butterflies and white-faced darter dragonflies are to be re-introduced, along with rare mossland plants such as lesser bladderwort and white-beaked sedge. Turbulence from high speed trains could affect reintroduced insect populations.
Abram Flash SSSI. Route maps shows a 'satellite construction compound' next to Abram Flash SSSI. The Flash is a shallow expanse of water which supports waders, waterfowl and swans. The proposed compound lies on acid wet grassland important for breeding waders. The effects of turning it into a construction compound would last for several years and, if not restored properly, could be permanent
Local Wildlife Site. The route destroys half of the ‘Ponds Near Lightshaw Lane’ Local Wildlife Site, a loss of 9  hectares and divides what remains in two. The site is of regional importance for dragonflies, damselflies, birds and amphibians.

Derbyshire Wildlife Trust – more here HS2 and here HS2
26 Local Wildlife Sites will be directly affected with 13 likely to be lost entirely and another 7 with between 10 and 50% loss. The area that will be lost is around 50ha. Key habitats lost include ancient semi-natural woodland, secondary woodland, ponds, reedbed, neutral grassland, open mosaic habitats and hedgerows.
Carr Vale Flash nature reserve will be affected, it is one of the most important bird reserves in Derbyshire, with regular sightings of rarities. Around 150 different bird species are recorded on the reserve each year. This wetland site also provides crucial habitat for grass snakes and a number of dragonflies, including county rarities such as red-veined darter and common hawker. The reserve is within the 1km corridor that will be created around the line during construction and so could be temporarily affected while it is being built

Nottinghamshire Wildlife Trust – more here HS2
Erewash Valley. Habitats including rare floodplain grassland in the Erewash Valley. Rare and flower-rich limestone grassland on the western edge of the county could be lost or severely damaged.
Toton. Potential loss of 91% of the Toton Local Wildlife Site as well as loss of 4 hectares of grassland at the Hucknall Airfield Local Wildlife Site - a site already seriously damaged by past housing development. Protected species such as bats, barn owls, great crested newts, water voles and otters will also be affected.
Bats and barn owls. Construction of the route would have a regionally significant impact on the East Midlands' bat population and deaths of barn owls due to collision with trains could affect the conservation status of the species, which has only in recent decades been brought back from the brink of extinction in Nottinghamshire.

Yorkshire Wildlife Trust - more here HS2
Water Haigh Woodland Park. 70 % of this nature reserve will be lost to the train route.   With inter-connected pockets of broadleaved woodland, pasture, hedgerow and wetland this wildlife haven on the outskirts of Leeds is home to a diverse population of flora and fauna. The former spoil heap is now wildflower meadow; otters enjoy the wetland, spring brings the skylark’s song, and birds such as Long-tailed, Great and Blue tits thrive.  Common Buzzards, Red kites, Cormorants and Grey Herons can be seen flying over. A nearby country park reserve at Rothwell Country Park will also be affected.
Willow tits are the UK’s most threatened resident bird with a 94% decline since the 1970s. The species has a stronghold in the Dearne Valley which is the focus of a major conservation project led by Yorkshire Wildlife Trust and RSPB. The proposed route will result in significant loss of habitat including fragmentation of known territories. It’s highly likely to lead to the extinction of this population and further decline of the species having significant national and potential international impacts. The Dearne Valley Wetlands, within the Valley are under consideration for designation as a SSSI. Yorkshire Wildlife Trust is objecting to the loss of habitat along the River Dearne and of the loss of habitat at Howell Wood and Barnburgh Cliff Local Wildlife Sites.
HS2 will have direct impacts on 9 of Yorkshire’s Living Landscape (LL) schemes; schemes though loss of habitat and fragmentation; along with further indirect effects as a result of construction and ongoing disturbance. It will also adversely impact a number of Nature Improvement Areas (NIA) and local Wildlife Habitat Networks. The route is highly likely to create irreparable damage to landscape both in Yorkshire and nationwide by fragmenting these networks.