Content powered by the new KOWA TSN-99 series
Bottlenose dolphins off the Yorkshire Coast in 2020 (c) Ana Cowie
Thousands of people up and down the land have been left thrilled at the sight of whales, dolphins, Atlantic bluefin tuna, extremely rare sea slugs and sand lizards – just a few of the highlights from The Wildlife Trusts’ 2020 marine review.

Extraordinary numbers of Atlantic bluefin tuna hunted along the length of the south coast in a dazzling ‘run’ up the English Channel over the summer and autumn. Up to 10ft long, these powerful fish can speed over 40 mph as they chase shoals of mackerel, sardines and herring. Bluefin tuna can live up to 40 years and weigh more than 250kg – about the same as 3 men – and this year were spotted from Cornwall and Devon in the west, to as far east as Folkestone, Kent. At some points, the bluefin tuna were accompanied by porpoise, minke whale and dolphins, in a huge feeding frenzy.

Abby Crosby, marine conservation officer, Cornwall Wildlife Trust says: “No one who saw this intense display of the power, aggression and athletic prowess of bluefin tuna says they will ever forget it. People were utterly spellbound in anticipation of the next startling leap of these huge, metallic-silver creatures from beneath the ocean waves, and many simply couldn’t believe this was happening just off the English coastline. Moments like these, where precious, unseen marine life just jumps into full view, remind me why my colleagues and I at The Wildlife Trusts continue to work hard for better protection of the marine environment.”

Extremely rare sighting of spectacular sea slug in UK waters
An extremely rare sighting of a stunning species of sea slug was made this November by a Cornwall Wildlife Trust Seasearch volunteer. The sea slug, Placida cremoniana, is a miniscule orange and black sacoglossan (or a sap sucking) sea slug measuring just millimetres in length. This species resembles a glowing lump of coal – but one covered in spikes – and is more usually found in the Pacific or Mediterranean. Sea slugs are soft-bodied marine animals famous for their often extraordinary bright colours and striking shapes.

Matt Slater, marine awareness officer, Cornwall Wildlife Trusts, says: “What a find! Our sharp-eyed volunteer, Shannon Moran, spotted a very unusual, extremely rare sea slug, helping Cornwall Wildlife Trust get a better idea of what’s out there in our coastal waters. It’s a stunning one too, displaying a firey-orange colour on its body, contrasting with thick black conical spikes all over. Given its tiny size, it’s incredible she spotted it at all.”

First orcas spotted in Northern Ireland’s Strangford Lough since 1962
People watched in awe as two orcas – killer whales – were seen in Strangford Lough for the first time in at least 50 years this May. One of them was recognised as ‘John Coe’, identified by the notch on his dorsal fin and the fact he is missing a chunk of his fluke. The pair are part of the West Coast Community, the only resident UK population of orcas, made up of 8 whales. The pod can be distinguished from other pods by a sloping patch around their eyes.

Heidi McIlvenny , Living Seas manager, Ulster Wildlife, says: “This pod of elusive orcas tends to circuit the coast of the Hebrides and around Ireland most years, but rarely do they come close to the coast, which is why they’re hardly ever seen. We were so lucky these intelligent mammals decided to take a detour and enter the lough this year. Why they came to us this year, is yet another mystery of the deep.”

More than 30 bottlenose dolphins seen ‘partying’ off the Teesside coast
Bottlenose dolphins were seen in uplifting, playful displays that delighted locals in Teesside for weeks this August. This was the first year that Tees Valley Wildlife Trust took part in the North Sea Cetacean Recording Project and what a year to join! In early August, more than 30 bottlenose dolphins were observed, on just one day, frolicking off Saltburn Pier, metres from captivated bystanders on the shore. The dolphin group was also spotted off Redcar and Hartlepool, again visible from the coastline. The dolphins earned their own Facebook fan club, set up by a Tees Valley Wildlife Trust volunteer, where excited locals exchanged their sightings and the best locations to capture the scene on camera.

Observers from recording projects up and down the coast have estimated that about 100 bottlenose dolphins now move up and down the north-east coast of England during the summer months, travelling up to 40 miles in a day and moving in pods of about 30. The public were so enthused in 2020 that 40 volunteers came forward to help with the citizen science project in Teesside alone. Some of the world’s biggest bottlenose dolphins live in UK waters, reaching up to 4m in length and weighing over 500kg – the same as a grand piano! Bottlenose dolphins are famed for their intelligence and sociable behaviour, which includes playing and babysitting each other’s young.

Jacky Watson, wilder coast officer, Tees Valley Wildlife Trust says: “The sight of dolphins off Teesside was a complete revelation for lots of local people and a gift for photographers. Many people had no idea bottlenose dolphins could be seen in UK waters, let alone here. This partying pod of dolphins were highly visible, playing, breaching vertically, racing along at top speed with fin after fin arcing through the waves. Social media was ablaze with the action, with people keen to find out where and when they could see the dolphins having so much fun! It was a real tonic for the soul following the spring lockdown. Our volunteers are still fired up and will be surveying all winter. There is still so much to learn and there’s always a chance of spotting one of the North East’s celebrity dolphins, named Runny Paint.” 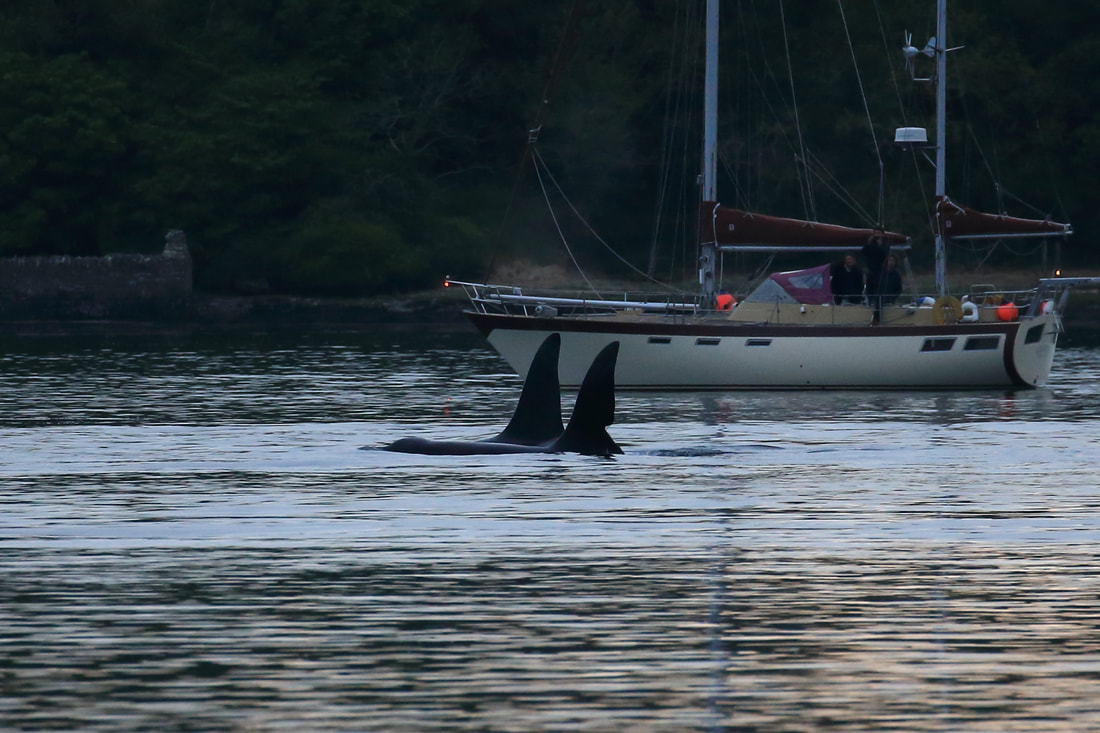 Orca's - Strangford Lough Ulster 2020 (c) Ronald Surgenor
Next article: WIN - enter our new photography competition for UK wildlife
Next article: Five of our favourite springtime wildlife sights and sounds
​Next article: Where can you watch owls in the UK?
Next article: Endangered beetle hides out at WWT Welney​
​Next article: BTO ask British public to participate in a national study of Tawny Owls and their calling behaviour
Next article: The prestigious Bird Photographer of the Year (BPOTY) competition has announced the 2018 winners